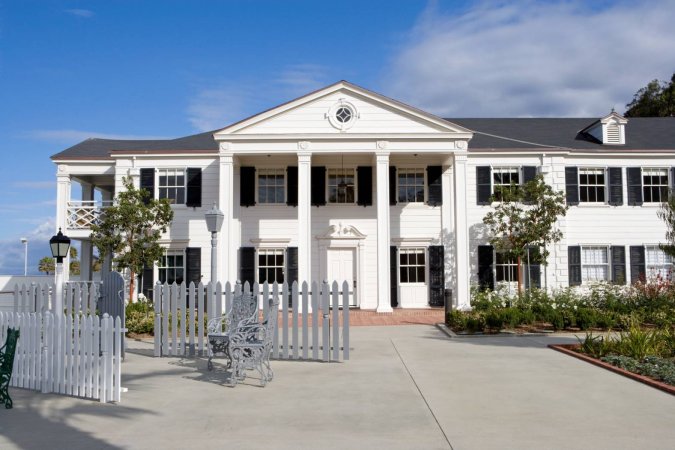 Ooh, if these Los Angeles landmarks could talk…what would they say? Let’s take the Annenberg Community Beach House. From 1929 to 1942, this Los Angeles landmark was happening. Every known dignitary and movie star spent hours partying at this beautiful property.

The appeal of this Los Angeles landmark is in more of a spirit nature, since the Annenberg Community Beach House, or as we call it now – the Beach House – sits where the 110-room “love” mansion that William Randolph Hearst had built for his then-girlfriend Marion Davies used to sit.

Like Frankenstein (but not in the monster way), parts of the Beach House are from the old original mansion. The Annenberg Foundation renovated the actual pool when it opened to the public. There’s an original guest house that’s still used for events.

The original year of completion was 1926; the architects of this Los Angeles landmark are Julia Morgan and William Flannery. The architectural type is Georgian style, and the original name for this mansion is the Marion Davies estate.

After the very married William Randolph Hearst and father to five children was finished using the Marion Davies estate as a private residence, it became a luxury hotel complete with a members-only “Sand and Sea Club.”

In 1959, the Marion Davies estate was torn down, and the property was sold to the State of California. The part of the Sand and Sea Club remained popular for many years until its lease
lapsed. The property deteriorated until the 1994 Northridge earthquake hit and suffered severe damage.

Then in 2005, the city and people of Santa Monica had a vision for the property’s future, and that’s when the Annenberg Foundation stepped in with $27.5 million to make that vision possible. And that vision included changing the Los Angeles landmark’s karma. Now, this is a facility where families can come free of charge and enjoy summer activities and a sense of community. This facility earned a Conservancy Preservation Award in 2010. Now that’s what we call good karma.

How Gerald sees it…